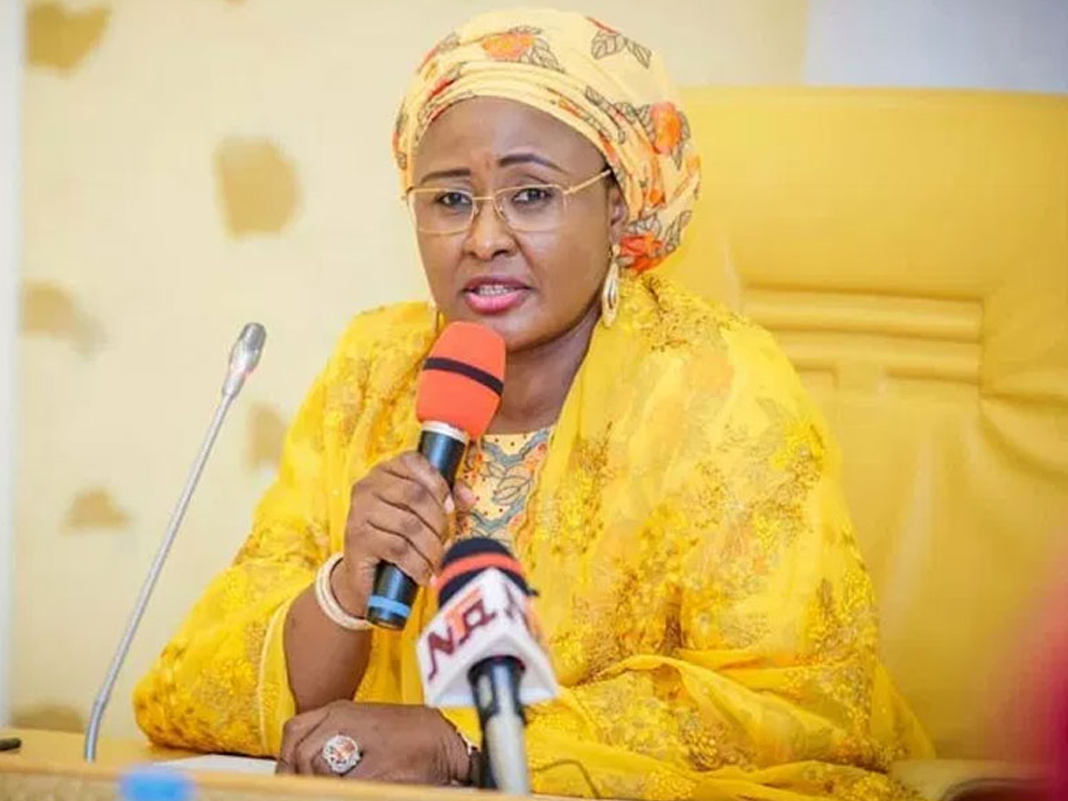 Two days after the widely publicized ‘wedding’ of Nigeria’s president to a second wife (needless mentioning the bandied name), the First Lady, Aisha Buhari returned from her trip abroad having been away for about two months. On arrival at the Nnamdi Azikiwe International Airport, Abuja, she spoke to newsmen about the reason for her trip, the purported wedding and other issues.

According to her “the genesis of this fake news started when my husband fell sick and perpetrators of this act were showing fake Ambulance, Hospital and dead body suggesting that my husband is dead. That time I received so many calls from other first ladies and Presidents of other countries to confirm; so I called the attention of NCC, NBC and the National Orientation Agency. Fake news will lead this country to something else if actions are not taken with immediate effect.”

Well, someone or some people noticed she was not visible in the public space over a period, and decided to spin out something out of malicious intentions.

According to Nobel Laureate, Prof Wole Soyinka sometime ago at a BBC hosted conference on the spread of false news in Nigeria he enjoyed reading the regular obituaries of his death! He warned “if we are not careful, World War III will be started by fake news, and that fake news will probably be generated by a Nigerian.”

Other Nigerians and global citizens have had their fair share of bruises as a result of fake news about them. Creators of fake news are mostly ill intentioned.  However, they would have been having little or no success if those who propagate them are less gullible, and well meaning on their part. Though some propagators are aware that the news is untrue!

The advents of the internet and social media have made it possible for everyone with access to them to be a reporter. However, not many are aware of the great responsibilities attached to accurate reportage.

Before we delve a little deeper into some of the responsibilities of reporting, let me make us do some introspection. What possibly is the source of fake news? The Bible gives us an insight to this, when the issue of the cause(s) of defilement arose in the days of Jesus Christ, he made His disciples understand that defilement is from inside out and not the other way round. In order words what comes from the heart is what defiles a man.  Jesus posits in Matthew 15:17-20 “Do you not yet understand that whatever enters the mouth goes into the stomach and is eliminated? But those things which proceed out of the mouth come from the heart, and they defile a man. For out of the heart proceed evil thoughts, murders, adulteries, fornications, thefts, false witness, blasphemies. These are the things which defile a man, but to eat with unwashed hands does not defile a man.” Notice that evil thoughts and false witness are in the list; these are components of fake news.

Furthermore, the Creator Himself said: “the heart is deceitful above all things, and desperately wicked; who can know it? ….” Jer. 17:9.  The answer is obvious: a deceitful and desperately wicked heart manufactures fake news! This also is true of those who spread it. Truth be told, when a man is motivated by love he will not spread falsehood about another person; because the same Bible submits that love is ever ready to believe the best of every person, 1Cor 13:7, AMPC, Translation.

Unfortunately, religious people including Christians also propagate fake news. Some of them including the Clergy even were actively involved in spreading the infamous Jubril from Sudan theory about President Buhari in the recent past; what a piece of news from desperately wicked hearts!

If care is not taken, anybody can fall into the deception of fake news, especially when it concerns people you hate or don’t like. What God said in Jeremiah 17:9 and what Jesus said in Matthew 15 actually agree. So a desperately wicked heart creates and spreads fake news.

That a person is a rival, political opponent, of a different religion, ethnic nationality, race or sex is no justification to cook up and spread fake news about him. You never know the degree of damage your action may cause; it could be as grave as genocide. As much as possible verify when in doubt, don’t share when it is not verifiable.

The Nigerian Government is in the process of imposing stiffer penalties on those who abuse the right to freedom of expression. In as much as this is the right way to go, it must be done with the highest sense of responsibility and good intentions. Government should also know that it is a double-edged sword which can be applied against present day officials of government who will be out of government in future. If the objective of the regulations are noble and good intentioned, government should go ahead speedily, and all stakeholders should collaborate to make it work.

Apart from the earthly governments’ sanctions for fake news purveyors, there is divine sanction. As God pointed out in Jeremiah 17:10 ‘I, the Lord, search the heart, and test the mind, even to give every man according to his ways, according to the fruit of his doings’, there will be a day of reckoning before the Almighty for actions emanating from our hearts including the creation and dissemination of fake news. Interestingly, Jesus also buttressed this in Matthew 12:33-37. Let me quote verses 36 and 37: ‘but I say to you that for every idle word men speak, they will give account of it in the Day of Judgment.  For by your words you will be justified and by your words you will be condemned.’

The phrase idle word refers to unfounded word: fake news. Fake news spread through words, and words in writing are of equal weight; and they will command commensurate consequences from government and of course divinely.  A person can escape government sanctions for whatever reason (including being connected to the government). But the truth is that divine sanctions are without respect of persons for those who refuse to change.

Let us all say no to fake news, and embrace love for one another and allow it to inform the information we disseminate.

Who A Leader Is

Update on COVID-19 in Nigeria