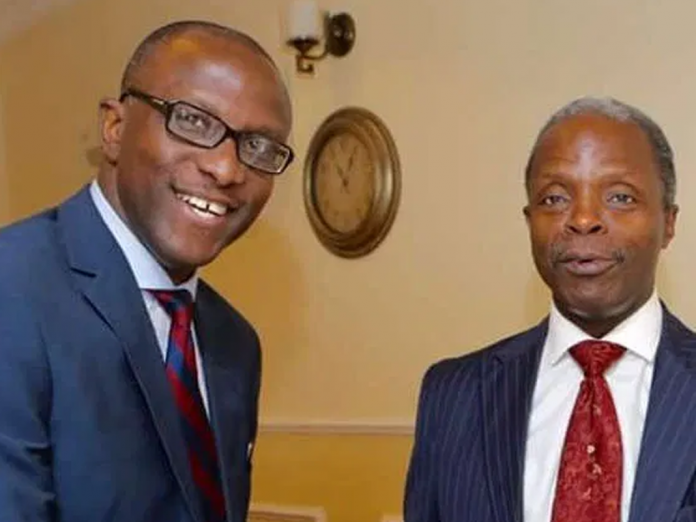 Osinbajo visits Nasarawa Farm where Ex-Militant from Delta is developing 3,000 hectares farm for crop and livestock production. The coming together of communities in Hadari Emirate district in Kokona LGA of Nasarawa State to form a farming settlement for the production of livestock and crop products, under the auspices of the Nigerian Farmers Group and Cooperative Society (NFGCS), is a true Nigerian story of honesty, hard work and cooperation regardless of ethnic differences and social background, according to Vice President Yemi Osinbajo, SAN.

The Vice President, accompanied by the State Governor, Engr. Abdullahi Sule, stated this on Thursday during a visit to the NFGCS Farms Centre located in Gaa’te village, Kokona LGA, Nasarawa State.

According to Prof. Osinbajo, “just going around today, I have seen a lot of hope that indeed this country can work and work very well again.

“If the people of this community can do all of what we are seeing here today, growing rice, other grains and also selling the products, I am very sure they will soon start exporting it; I think this is how it should really be.”

The NFGCS farm, which was founded by an ex-Niger Delta militant, Mr. Reston Tedheke, started with three hectares and N1.5m in 2017, now occupies 3,000 hectares and is worth about a billion naira, with over 300 people employed. Tedheke was inspired by the Buhari administration’s focus on Agricultural diversification of the Nigerian economy. The components of the farm include a ranch, crop farm, poultry and a rice mill, amongst others.

“You can see that Mr. Retson Tedheke left Delta State with his family to live here, and they can feel safe here and enjoy everything that the indigenes of this State enjoy. In fact, he tells me he is now officially an indigene of the State; this is the story of a great nation,” the Vice President noted.

Continuing, Prof. Osinbajo stated that what the youth in Kokona LGA are doing is the real revolution that Nigeria requires.

He said: “I think what we are seeing here today is the revolution that we have been talking about, the real revolution; of ideas, the revolution of technology, the revolution of young Nigerians who are determined to ensure that in this country, they make money (legitimately); and they can produce what they eat. This is the story of great nations.

Speaking about the resilience of the Nigeria Farmers Group and Cooperative Society and their promoters, the Vice President urged other youth groups to emulate their doggedness to succeed even under what sometimes could be difficult conditions.

According to him, “I was also quite fascinated by the way that they have been able to get credit. Just like he (Tedheke) pointed out, the banks had not been too willing to lend to farming start-ups.

“Small agricultural enterprises don’t necessarily attract the best credits from our banks.  But I have been told that “Kiakia”, a FinTech company, also a mobile payment company that also gives credit to farming communities, has supported this project.”

On his part, Governor Sule commended the efforts of Tedheke for the courage to invest in a community different from his own.

He said the investment in the agricultural project was not by accident, noting that the State government under his watch is putting in place policies that would attract investments to the state, especially in areas where it has comparative advantage.

He also commended the traditional council of Kokona Local Government Area for their support and efforts in ensuring peaceful co-existence amongst the different ethnic groups in the area.

Earlier in his remark, the coordinator of the NFGCS Farms Centre, Mr. Tedheke, thanked the Vice President for personally visiting the farm, and the Nasarawa State Governor, for the support in actualizing the dream of building the farm.

He, however, appealed for more support from the State and Federal Government in the areas of infrastructure, especially road and power.

The NFGCS is an organization established in 2017 under a partnership with farming communities in Hadari Emirate District in the Kokona LGA, especially in Gaa’te, Marke, Mante, and Sabon Gida villages.